by M G October 10, 2020
“How can a pipe in the middle of nowhere improve my crops health?”
That's the question one of our customers - a Spanish grower of pumpkins, melons and watermelons - asked himself, referring to our sensors.

And yet, despite his scepticism, he decided to give moisture sensors a try, address a few serious doubts about his irrigation schedule. Up to that point, he used to irrigate twice a day to avoid droughts, but had no way of knowing if the amount of water being used was what the crops needed. Indeed, he had the strong suspicion that he was over-irrigating. A definite clue was that his crops were often plagued by powdery mildew, a fungal disease many farmers are familiar with.

Powdery mildew covers crops leaves with whitish powdery spots and is common in many types of crops, like barley, legumes, onions etc. In fact, for pumpkins and watermelons (and other species of the gourd family, like zucchini and cucumbers) it’s so common that new cultivars of melons are being developed to make them resistant to one of the fungus variations. The disease directly affects yields because it limits the plant’s photosynthetic capacity and therefore its growth. 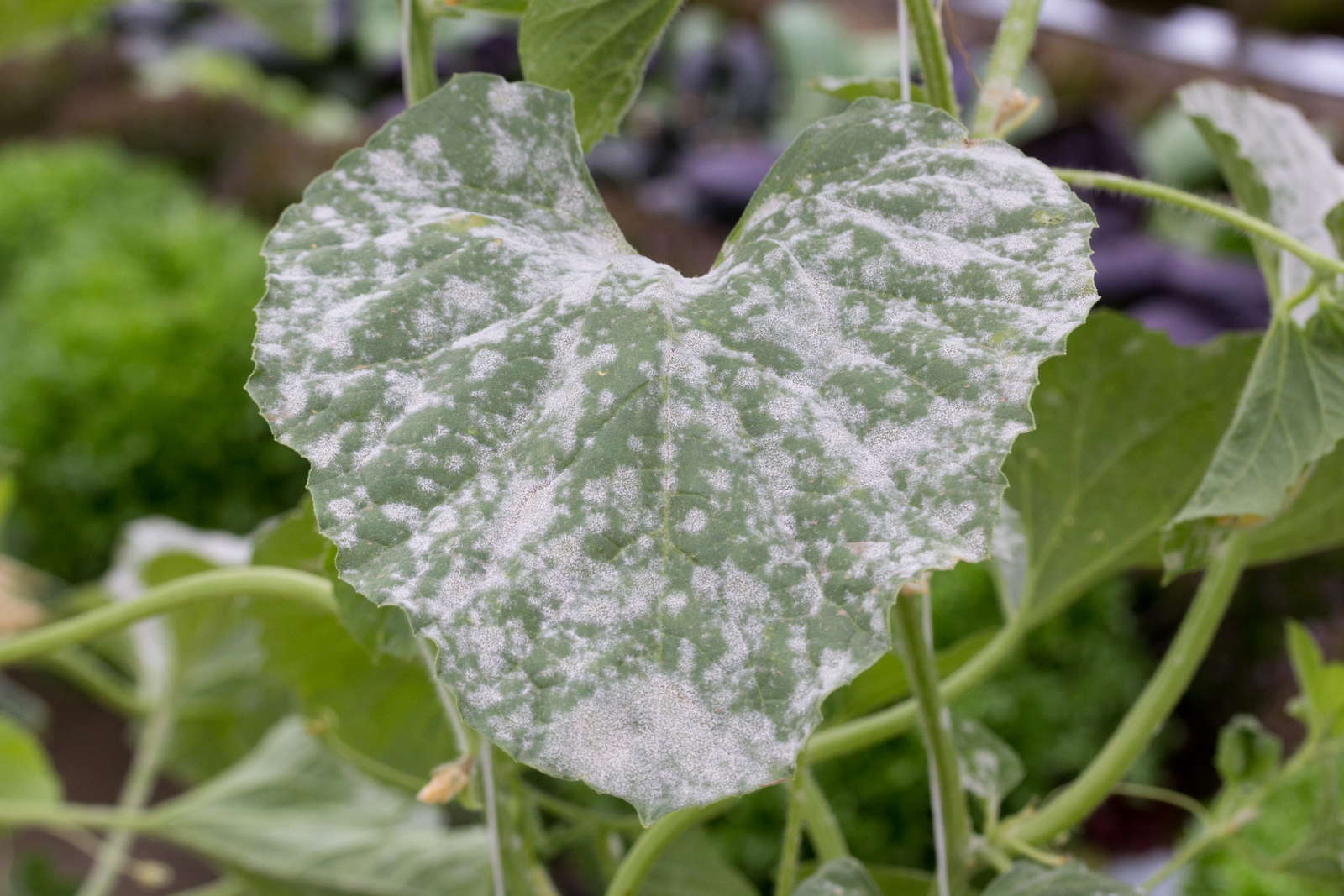 Like all fungal diseases, powdery mildew grows in humid environments. Pumpkins can be particularly vulnerable because the large and dense foliage screens the soil from the sun, keeping humidity higher. Unlike other fungal diseases however, it needs relatively less humidity, so it’s even more important to get the moisture levels right.

Our customer was sceptical of how soil moisture sensors could help him, but he knew he had to do something in order to base decisions on accurate data. We should say at this point that he was by no means new to farming. He was new to pumpkins, though, so he had little experience of the specific needs of the crop. Unfortunately, farmers are forced to change crops more frequently than we think to follow market demand. For them, that often means starting from scratch in spite of their experience.

We installed a kit of 4 sensors at the corners of one sector of the field. Although this sector had an even topology (same altitude and type of surface), the farmer was noticing that in certain areas crops were growing better, while in others they were struggling. This can happen for several reasons: different areas get more or less shadow or more or less water during irrigation, or water absorption rate varies because of different soil composition. 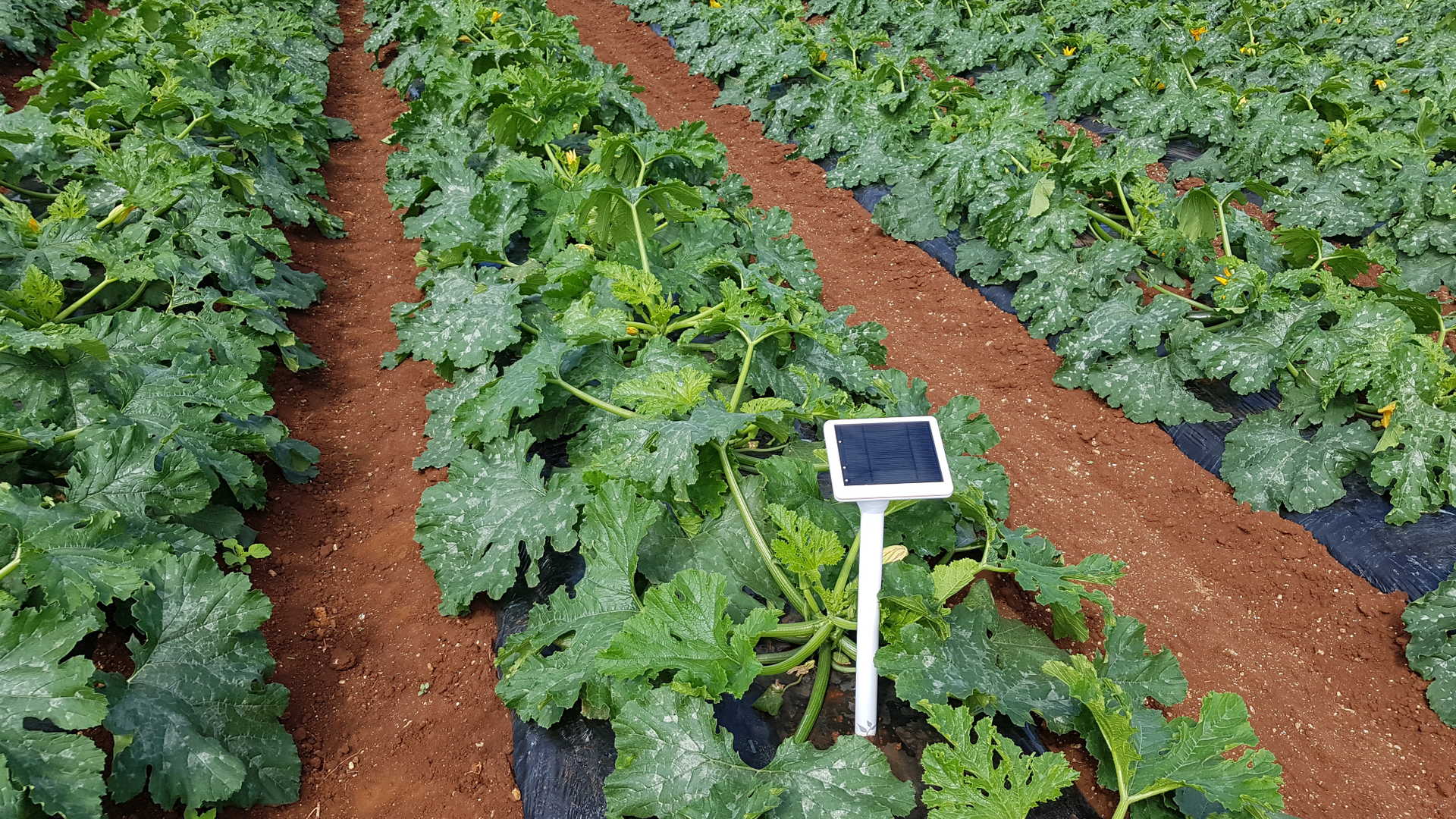 For the first 2 weeks after installation, the farmer didn’t change the irrigation schedule, as he wanted to see how soil humidity was affected.

Our data analysis software showed how the spikes of humidity would go up immediately with irrigation. It was clear that the soil was receiving too much water, so he adjusted the irrigation frequency until he reached an optimal level. First, he went from twice to once a day, and then to once every two days.

In the space of few weeks, soil moisture went down to the right level for the crops, and eventually the farmer used 70% less water on average.

Also, powdery mildew showed up much less than before, so he could use a preventative fungicide instead of a more aggressive one.

But there's more to this story. After seeing such tangible results on his crops, the farmer went from scepticism to being an advocate for our sensors, and started to recommend them to other farmers and is also helping us to distribute them around his farm area.

How our sensors work

Our sensors communicate to one another through a protocol called LoRa, an acronym for Long Range. LoRa uses license-free radio frequencies and works over long distances, which makes it perfect for rural areas.

They can be installed in one minute and are completely autonomous: they turn on and off automatically, collect data and send it to our system where it gets processed. Users can view the results of measurements directly on our portal, without having to install any software. Also, they have no moving parts and are powered by a solar panel, so they need no maintenance.